Some time back when I had to completely re-write our map to get over the ThinkGeo 3.0 clean slate rewrite, one of the highly desirable goals given to me was to be able to specify an arbitrary rotation for our entire map. I don’t recall the reason, and couldn’t find our forum discussion from back then, but eventually we gave up on that. I couldn’t find any recent threads on the topic, and somewhere we saw that improved rotation was talked about, so now we are wondering if we can circle back to pick that up with your V10 update?

So this is our problem.

We have a RotationProjection which is used to rotate a layer, it should support raster layer, shape layer and inmemory layers. You should want to assign it to the featureSource or imageSource of the layers. The “compass” should be named MagneticDeclinationAdornmentLayer now, it can be set projection by ProjectionToDecimalDegrees, the ScaleBarAdornmentLayer also have this property.

For mini map you should want to assign the projection to each layer inside it:

This file has been truncated. show original

Thanks. I will let the interested parties know that this should be available now, and that they can prioritize to work into our schedule as they see fit.

Oddly, I note that you are now responding as “Ethan”, but signing as “Don”.

Thanks for your update.

And please don’t worry about the account name, it just renamed this year.

Even though rotation has been a significant desire for a long time, those making priority decisions kept deferring it until now. So I’m just now starting on this by migrating my original rotation code (from before raster layers supported transforms) to the current TG library we are using (10.0.0.0). It all went very smoothly until I started testing.

Everything stays aligned until you hit 90*. At that point the raster layer changes aspect ratio from rectangular to square. You can see the effect in the images below. Both layers use a shared rotation transform, and no other transforms are applied. 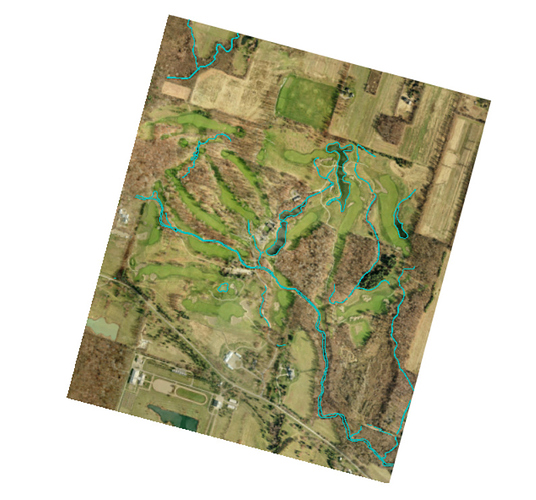 // but when it goes to 90* left, the shape file maintains it’s aspect ratio, but the raster image has become distorted into a square 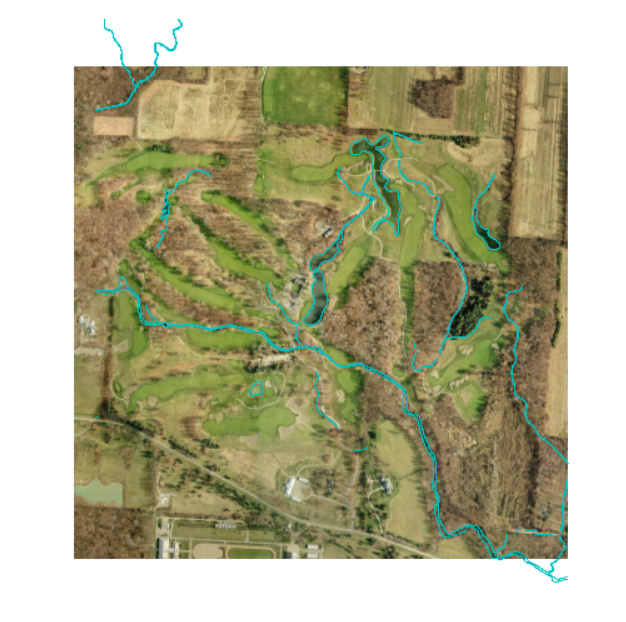 Interesting update. It’s not always consistent in what it’s producing. Notice this image is 180* from normal non-rotated image. In this one, it’s not clipping the raster image, but rather the shape file is now shifted down and misaligned with the background features. In the first image above, you can see how the shape file blue line sort of follows the outline of some of the darker features. And looking at this image, those outlines are clearly offset downward, plus the line hanging off the bottom of the background image. 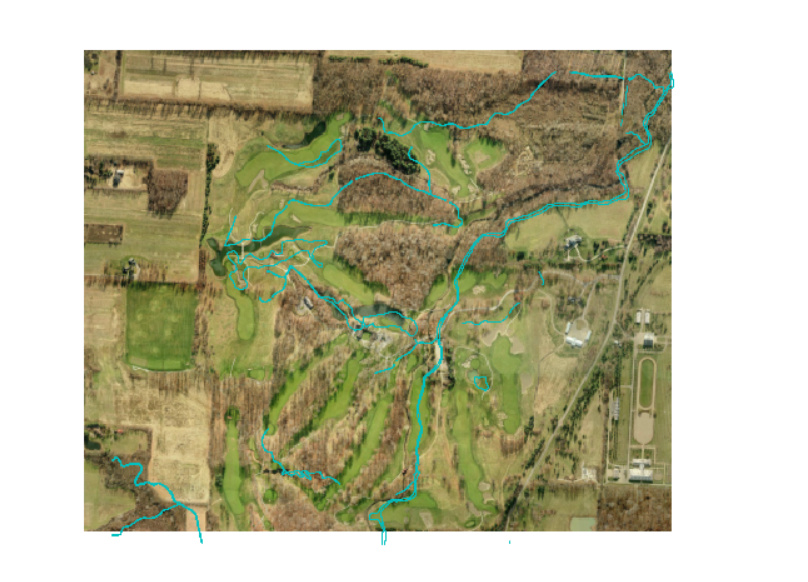 And it changes from one test to another. Here is another image with only 90* left (CCW)) rotation from original.

And another more jacked up. It’s only a small amount misaligned, but the view port clipping on the raster layer is even more pronounced. 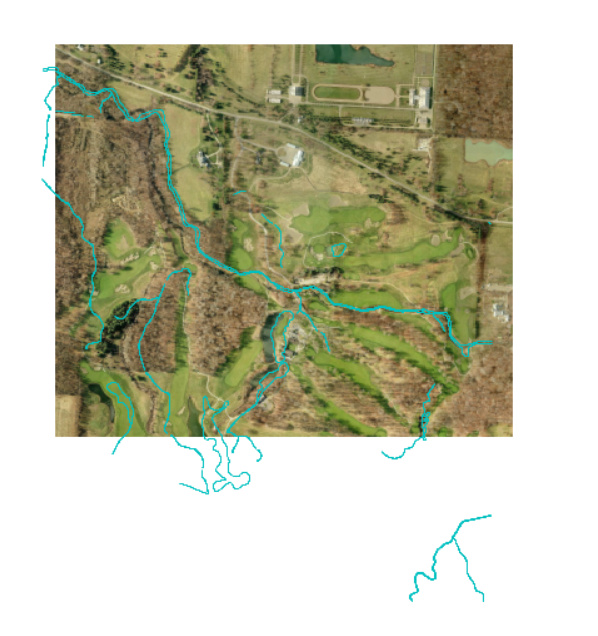 Thanks to let us know this issue.

Our developer will try to reproduce it and work on it.

We want to know what’s the type of raster image and moer information for example your detail package version. If possible could you please upload your test sample with the test data, it should be helpful.

I doubt it matters, but the raster is a jpeg.

I would be happy to provide you with the “detail package version”, but you’ll need to tell me how to do that. I thought it might be in the Product Center, but that doesn’t seem the case. I looked at the NuGet intalled list, but that’s a bit of a mess. Installed Version shows version 10.1.0, but each package has a different version including 10.6.0, 10.6.2, 10.6.7, and 10.6.12. All those are annotated with “Latest Stable”, so hopefully that helps without having to laboriously detail each package.

Not sure if it helps, but when interleaving zooming and rotating, the problem seems to be exacerbated.

I think you should also render the image by NativeImageRasterLayer and rotate it by RotationProjection, if you are using other class please let me know.

I build a sample then reproduce that, it looks the image resize follow rotate angle get changed, our developer will look into it.

Any update I will let you know.

You are correct in what was used. Also, the same RotationProjection is used for all layers.

Thank you. Looking forward to answers.

Thanks for let us know it, this is a complex issue.

Our developer is working for it, any question or update I will let you know.

Thank you, looking forward to it.

It looks this API is not so easy to use, I think we will enhance it in future version.

I hope that solve your problem.

Unfortunately, we already do that, and have since the beginning. Other than dealing with other layers (like compass), and different variable names, it’s exactly the same.

And your sample isn’t even reasonably acceptable.

First, when at/near 90* it just truncates everything as it forces the longer width to clip to match the shorter height. This is doing nothing but demonstrating the clipped view window I already reported.
Given that our maps are sized to utilize almost all the space, that simply doesn’t work. And our maps are generally almost twice as wide as they are tall, this is even more problematic.

Also, it doesn’t include a shape layer. As shown in my images, they don’t get clipped when at/near 90 when the image does get clipped. It’s just rotating a raster image, which apparently is all they tried and called it good, “ship it”.

On top of that, if you keep rotating, it gets completely nuts as more and more of the map along both width and height gets clipped (not just the long side). It’s not always reproducible, but seems to require interaction between zoom and rotate, something that we need to work correctly. See image taken from your unmodified project for reference.

So again, all you did was post an example of nothing but a raster layer rotating, and failing exactly as I reported, without even an attempt to include a shape file layer for reference. 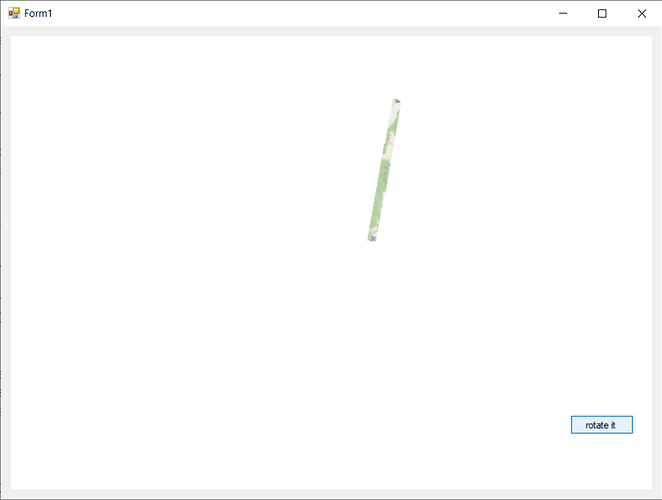 Also, please remember that there is one reported problem that isn’t even part of your 8619.zip. That problem is that when you include a shape file with features that must align with features on the background image, AND you get into that unpredictable state caused by changing zoom and rotating, the layers become increasingly misaligned.

But you (they) can’t even consider whether that problem is managed by a “work around” if a shape layer isn’t included.

I’ll also add that we also use InMemoryFeatureLayer layers on top of the shape layers, which all need to remain aligned without arbitrary clipping. I didn’t include that in my initial report because the shape file layer is sufficient to see the problem, and they seem to be staying aligned with the IMMFL layers when rotating and zooming. Omission of that detail was intended to keep it simple, but I thought I would add that point in just for reference.

My apologies. I don’t know your code so when I reproduce it my sample hadn’t set the rotated extent, after that I found add it the image don’t get stretched in most angles. I think that should be the reason and your code should hadn’t set it also. I hadn’t found a shape file match the image file to test, so I used our states.shp but it didn’t shows the match issue, then I removed it from sample.

Today I test it follow your information, I found the issues include image get clipped in special angle, exception get thrown when zoom&pan&rotate works together.

In fact our rotate is not direct rotate the source image, it used the projection to simulate a rotate. Projection work for vector layer for example shape file, so it have some issues when used to rotate an image for example the raster layer. I am not sure whether the issues can be solved but our developer will keep work on it.

In fact there is a better solution, you can try our WPF edition version 12, WPF edition support perfect rotate without the issues, because it rotate the map in control level. You can try it from our simple sample for example: https://github.com/ThinkGeo/QuickstartSample-forWpf.NetCore, when the map shows, you can press left “Alt” in keyboard and rotate the map by mouse. You can also set it in code to mapView.RotatedAngle;

Our latest version 12 support .net framework 4.6.1 also. And your application can keep to use WinForms, here is a guide about it: https://blog.thinkgeo.com/2019/05/23/using-the-thinkgeo-ui-control-for-wpf-in-your-winforms-app/

If you have any question about it please let us know. I hope it’s helpful to solve your issue, any update if we get in rotate projection I will let you know also.

I don’t think we’ll be porting it to WPF. The cost would far outweigh the benefit.

Are you saying that the WinForms v12 library works for rotation of raster images? If so, that’s probably the best bet. And for reference, we are on .Net 4.8

As for rotating the image after rendering, that would seem clearly the best choice. Too bad they didn’t do that in WinForms

In fact your can keep your application in winforms, just use the WPF control to render map. And in same version, the code to render on WPF is nearly the same with Winforms, I think you can did a quickly test on that.

Because special feature in WPF we can implement the rotate in control level, but we hadn’t found a way to do the same thing for winforms.

If you choose rotation projection way it’s the same in V12 and V10, the rotate control is new feature in V12.